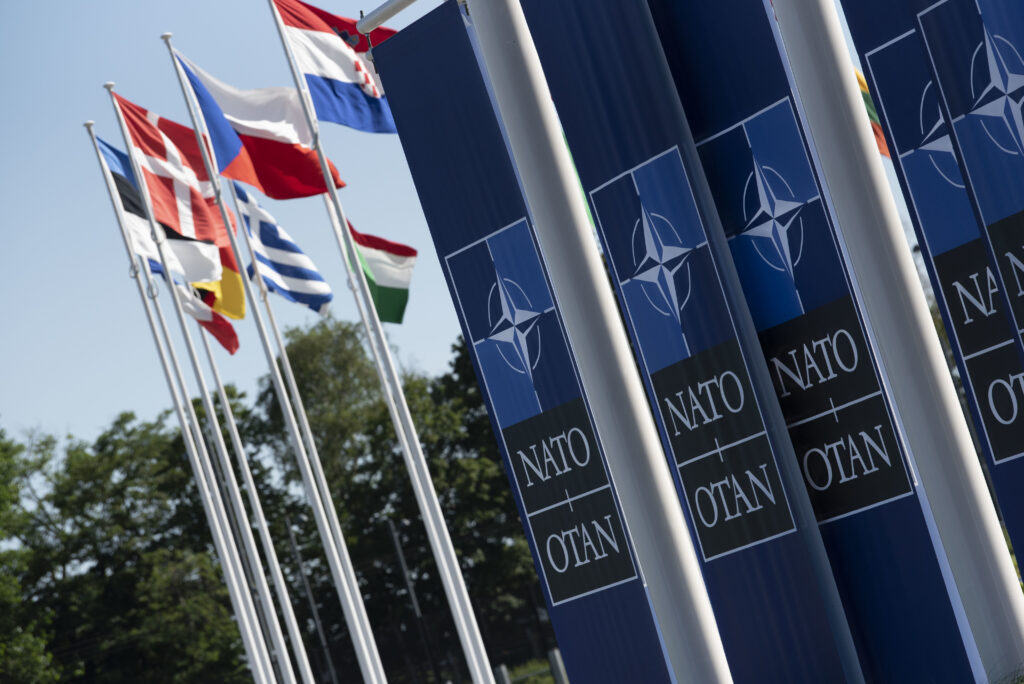 NATO was formed with one main goal – stop the emerging Soviet threat of expansion into Western Europe. Seventy years later, the USSR has collapsed, and the former Eastern Bloc has broken into individual nations, leading a casual observer to think the mission was accomplished. But the tensions between Russia and the West remain, brought to a head by the war in Ukraine.

Today, there is a very real prospect of Finland and Sweden joining NATO, and many Americans are asking about NATO’s modern purpose, what the U.S.’s role in the alliance should be, and what actions serve our best interests here at home.

Thinking about NATO’s future requires understanding how Europe’s security situation in the 2020s is very different from those during the Cold War. Though tensions are higher with Russia than in the immediate post-Cold War era, Russia is a vastly less powerful threat than the Soviet Union was. What’s more, Europe is collectively much wealthier and more capable of deterring Russia without the U.S. playing a leading role in its defense. These changed realities should guide how Americans think about NATO’s future mission and the U.S.’s role in it.

Unlike during the Cold War, the conventional balance of power now favors NATO Europe. These nations collectively boast nearly ten times Russia’s GDP. NATO Europe also outspends Russia militarily anywhere from two to five-fold, depending on the measurement. Finally, the European allies also have the manpower edge, with twice Russia’s available active-duty troops.  Russia’s poor performance in its invasion of Ukraine should underscore Europe’s military advantages against Russia even further.

If the Russian armed forces can’t take Kyiv or Kharkiv, they’re not about to overrun Warsaw or Berlin.

During the Cold War, the U.S.’s lead role protecting Europe was arguably necessary to balance against the combat power of the Warsaw Pact. Now that this is no longer the case, Europe should assume main responsibility for its own defense.

Unfortunately, the United States’ continued presence as the lead military power on the Continent encourages its wealthy European allies to free-ride on American security. Only seven of the 28 members of NATO Europe have met the alliance’s target goal of members spending two percent or more of their GDP on defense. The European Union is the third-largest economy in the world behind the United States. Europe’s ability to invest in its own defense isn’t the issue, European political will is.

The Ukraine War should be a wake-up call for the U.S.’s European allies to reinvest in their security. Clearly, Europe has the capacity to take the lead supporting Ukraine and deterring Russia longer-term. The best way for the U.S. to encourage Europe to do so and to free up American resources for areas more strategically important to the United States, such as Asia, is to minimize its own role in NATO and to encourage European strategic autonomy outside of the alliance.

The U.S. now has over 100,000 troops permanently stationed in Europe to deter Russia. Instead of doubling down on this footprint, the United States should gradually reduce it, allowing Europeans the option of replacing forward-deployed U.S. troops with their own. The U.S. can instead adopt a logistical support role in NATO, transitioning the principal frontline defense of Europe to Europe itself.

The best way for Europe to be able to defend itself without dragging the United States into a war disconnected from its national interests is for Europe to build the capacity to act outside of NATO.

The United States should encourage the growth of EU-specific defense capabilities alongside NATO, such as the European Union’s Common Security and Defence Policy. NATO Europe, which largely overlaps with EU membership, should take the interoperability lessons it has learned from the alliance to build out parallel structures through the EU that will allow it to act on issues of European security without reliance on U.S. support. Americans should welcome our European allies gaining more independent capability–U.S. military involvement in conflicts that do not implicate core American national interests simply raise the risk of U.S. hostilities with nuclear-armed Russia. Amid record inflation, debt, and an ongoing confrontation with China, the U.S. should be seeking to limit, not magnify, the number of major competitors it bears principal responsibility for deterring.

The Finland and Sweden NATO debate

Since Russia’s invasion of Ukraine, historically militarily non-aligned Finland and Sweden have swiftly moved toward formally applying to NATO. On May 18th, both countries formally filed their applications to join the alliance at its headquarters in Brussels. Both nations boast modern, capable militaries.
Despite their well-equipped forces, it’s important to remember that Finland and Sweden’s militaries are geared toward territorial defense.

Both countries maintain small active forces of less than 25,000 troops  apiece. Finland and Sweden rely on large pools of reserve troops activating to defend their countries in case of an attack. This approach can make the potential costs of occupying either country too high for a would-be attacker like Russia. Nevertheless, because of this approach to designing their militaries, neither Finland or Sweden are well-equipped for deploying their forces elsewhere in support of other NATO allies under attack. . Additionally, both still spend well under 2% of their GDP on defense.

Before weighing the merits of their applications, it is worth looking at how Finland and Sweden protected themselves outside of NATO. During the Cold War, both countries carried on traditions of well-armed neutrality, recognizing their interests in maintaining friendly relations with the West while taking care not to antagonize Soviet Russia.

Through outward non-alignment and maintaining capable defensive militaries, Finland and Sweden succeeded in protecting their safety and prosperity when they faced a far greater threat from the USSR than Russia today. It’s understandable that Russia’s invasion of Ukraine would make Finland and Sweden reconsider military nonalignment, but keeping either outside of the alliance is hardly consigning them to domination by Russia.

The U.S. already has the military interoperability benefits of Finnish and Swedish NATO membership through cooperation with both countries outside of NATO. In the 1990s after the USSR’s fall, both nations joined the EU and increased military cooperation with NATO through the alliance’s Partnership for Peace program. Since then Finland and Sweden have increasingly joined NATO exercises involving tens of thousands of troops. This year, both countries joined NATO’s Exercise Cold Response, involving over 30,000 troops and hosted in Norway. These years of training already give Finland and Sweden the know-how they need to easily fight alongside NATO forces should the need ever arise.

If Finland and Sweden already work well with NATO, what does alliance membership change?

Put plainly, the main benefit Finland and Sweden gain from NATO membership is becoming permanent members of the American nuclear umbrella and having the U.S. legally bound to come to their aid militarily if Russia attacks them.

Americans should take the risks of these permanent new guarantees seriously given the geography at play. Finland shares an 830-mile border with Russia—adding it to the alliance would more than double the alliance’s current territory adjoining Russia. The largely remote, difficult-to-access, and infiltration-prone Finnish-Russian border will be a new, permanent source of potential tension and raise the risk of accidents that could cause dangerous NATO-Russia escalation.

And because adding Finland and Sweden to NATO would further increase the alliance’s conventional overmatch against Russia, it will encourage Moscow to rely more upon nuclear threats in its deterrent strategy when disputes arise. We’ve already seen Russia state publicly that it will move nuclear weapons to the Baltic if Finland and Sweden join the alliance.

Strategically, admitting Finland and Sweden to NATO will tie down additional U.S. forces in Europe at a time when America should be pivoting to Asia instead and addressing its own economic challenges at home. A pre-Ukraine crisis estimate of the forces needed for robust NATO forward defenses of Finland and Sweden suggest the alliance would need to deploy additional combat brigades and air defense units, of which America would have to provide the bulk. Since the war in Ukraine, these forces would likely have to be increased.

Previewing future U.S. deployment burdens under an expanded NATO, the very day Sweden submitted its application to the alliance, it asked the United States to send additional naval patrols to the Baltic Sea, a region of lower priority for limited U.S. naval resources than the Pacific.

American policymakers should not rush to take on permanent new defense obligations to countries that have remained free and prosperous for decades without U.S. guarantees. In a region where wealthy allies can play a greater role, the Finland and Sweden NATO debate should be an opportunity for the U.S. to insist on a re-imagining of its own role in the alliance as it attends to America’s greater strategic needs in the Pacific. At the NATO Madrid summit in June, the U.S. should call on Europe to mature its own security pacts like the EU’s CSDP and regional alliances like the Nordic Defence Cooperation organization to deliver on security needs that Europe is capable of providing for itself.

Russia’s weakness compared to the Soviet Union and its poor performance in Ukraine underscore how much more secure NATO-Europe is in the 2020s than it was during the Cold War. With Russia struggling, it is an opportune time for the U.S. to safely refocus on Asia instead of doubling down on Europe.

Europe is in a position to defend itself without U.S. support, and America can further its own interests and those of its allies by encouraging Europe to build out its capacity for non-NATO EU operations. Despite their military capabilities, precipitously admitting Sweden and Finland into NATO could risk locking in a heavy permanent U.S. presence for Europe for decades to come.

Americans are best served by a realism-based foreign policy that keeps us out of unnecessary entanglements and puts the needs of our people first.

Concerned Veterans for America is celebrating 10 years of defending the freedom we fought and sacrificed for in uniform. In…