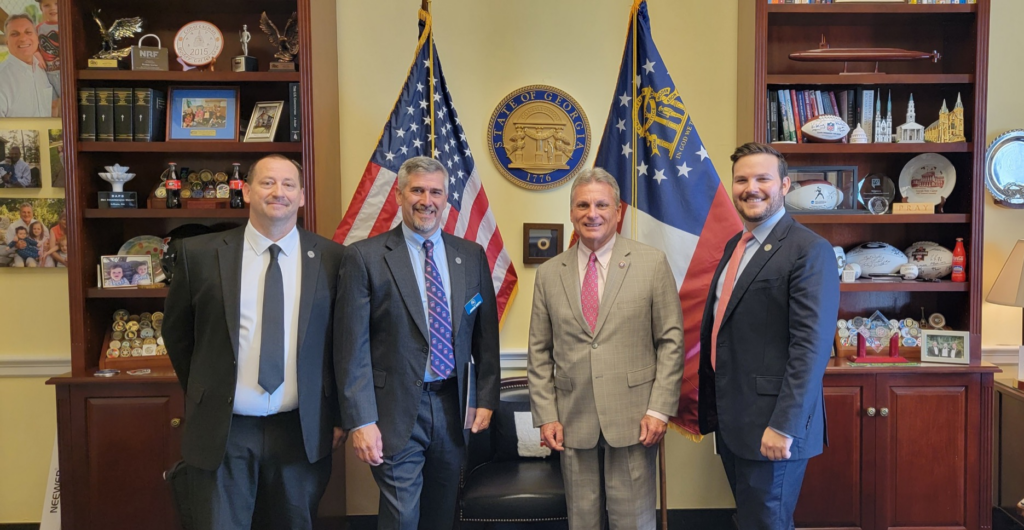 Each year, Concerned Veterans for America brings in staff from around the country for them to do what they do best: advocate policy changes that are good for veterans and the country.

This event, known as Vets on the Hill, is all about veterans sharing their unique experiences and perspectives with lawmakers to drive positive policy changes that benefit all Americans. Veterans have solutions to the country’s biggest problems, solutions that preserve the freedom vets sacrificed for.

Forging this personal connection with members of Congress makes a huge difference when it comes to reform. We’re able to hammer home how Washington’s policies affect everyday Americans in a powerful way.

In past years, Veterans sharing their experiences with failures at the hands of the Department of Veterans Affairs and the need for more non-VA options in their health care put pressure on lawmakers to pass accountability and choice legislation.

Veterans talking about their deployments in seemingly endless wars helped build a bipartisan coalition that was essential to ending the war in Afghanistan.

During this year’s Vets on the Hill, our staff met with dozens of lawmakers and their offices from both sides of the aisle to talk about issues that both sides can agree on – improved access to health care for veterans and a better approach to foreign policy.

And our efforts were successful – we saw seven members whose offices we visited choose to cosponsor the legislation we were advocating.

“This was my first time joining Vets on the Hill, and it was even better than expected,” CVA Grassroots Engagement Director Michael Pounds said. “I was able to share not just my own experiences, but those of the veteran community I’m part of in Ohio. I’m hopeful that giving the perspective of those on the ground will push our leaders to make some changes at the VA.”

“I’ve participated in Vets on the Hill several times and have seen first-hand the impact our work can have. Our efforts to end the war in Afghanistan led to a full withdrawal of troops. I know veterans sharing their stories and perspectives on Afghanistan was a crucial piece of that decision in Washington. I hope to see lawmakers continue to listen to vets about ending our other endless wars.”

Here’s a look behind the scenes at Vets on the Hill.

(Left to right) Navy veterans Ray Hoskins and Edrys Leyva and Army veteran Brian Fay walk toward their first meeting with lawmakers on the Hill. CVA’s Texas team – (left to right) Army veterans William Thomas and Jonathan Ramirez and Marine veterans Osvaldo Gutierrez and Ben Rangel – take a moment for a selfie as they wait for their first meeting. CVA’s Ohio team – (left to right) Marine veteran Michael Pounds, Army veteran Michael Pichichero, and Air Force veteran Ian Robinson – poses outside the Rayburn House Office Building before meetings with lawmakers. All three were at Vets on the Hill for the first time this year and brought fresh perspectives from their veteran communities back in Ohio. Navy veteran Nate Banks (left), Americans for Prosperity Montana State Director David Herbst (middle), and Army veteran Scott Hagan (right) met with Rep. Matt Rosendale of Montana to talk about CVA’s agenda, specifically about our approach to foreign policy. Rep. Rosendale has been a vocal opponent of the U.S. getting directly involved in Russia’s war on Ukraine. He also agreed to cosponsor the GHAPS Act after meeting with CVA staff. (Left to right) Josh Stanwitz, Army veteran Luis Cardona, David Herbst, and Scott Hagan met with Sen. Steve Daines to discuss ways to partner on future VA reforms. The group shared that veterans need to have more choice over their medical care and asked for Sen. Daines to lead the way in supporting choice legislation. After a discussion on war powers reforms, Sen. Daines agreed to push for repealing outdated Authorizations for Use of Military Force.

There is never a moment of downtime on the Hill. Marine veteran David Huston and Navy veteran William Huff watch speeches happening on the House floor while waiting for their next meeting. Ben Rangel met with Rep. Pete Sessions to discuss repealing outdated Authorizations for Use of Military Force and how to rethink U.S. foreign policy.

Veterans carry the weight of poor policy decisions. That’s why they need to speak up and be leaders in their communities.

Vets on the Hill doesn’t just give CVA staff the chance to share their own experiences; it gives their communities back home a louder voice and direct line to lawmakers.

We hope to see more veterans’ stories lead to reform at the VA and a better approach to our nation’s foreign policy. Will you join us in that fight?

Sign up to get regular updates from CVA for opportunities to make your voice heard.

CVA Executive Director Russ Duerstine sees America’s endless wars from a unique perspective: that of a veteran, but also of…