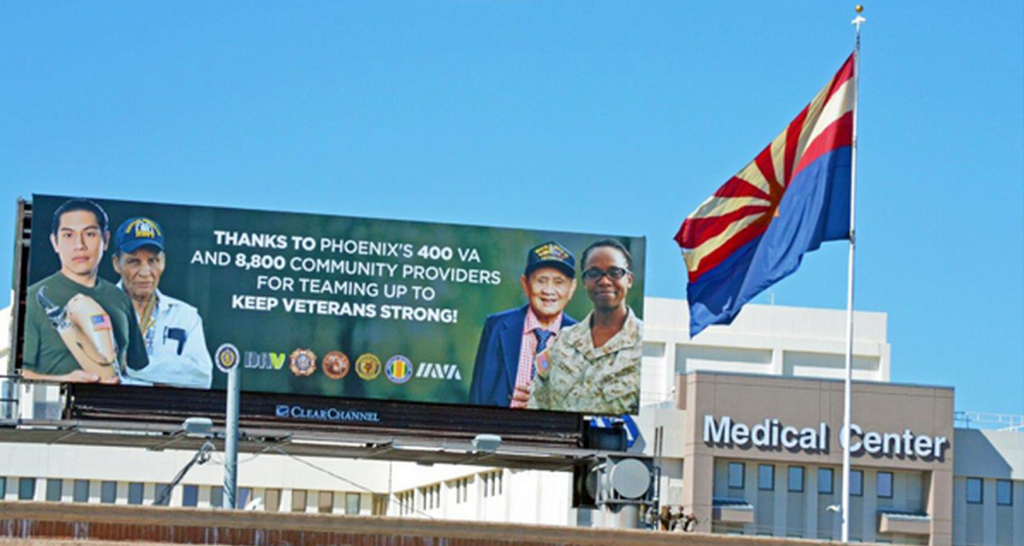 Phoenix, AZ — New, unironic billboards have been put up outside of the Department of Veterans Affairs (VA) in Phoenix, thanking the VA for “keep[ing] veterans strong.” The billboards – which do not appear to be a joke – come in light of a new wave of controversy at the scandal-plagued Phoenix VA.

This month alone, at the Phoenix VA: The billboard reads: “Thanks to Phoenix’s 400 VA and 8,800 community providers for teaming up to keep veterans strong!”

“This reminds me of when VA Secretary Bob McDonald compared wait times at the VA to wait times for rides at Disneyland. Thanking any Phoenix VA facility for keeping veterans strong after it was just revealed that veterans are still dying waiting for care there is completely tone deaf. It’s our veterans, who continue to suffer despite having sacrificed their lives for this country, who should be thanked.

“To this day, there are still people who want to deny that the VA is failing, and it’s preventing meaningful reform from passing in Congress. It’s more important than ever to shed light on the truth and urge our elected officials to take action.”

Next Tuesday, CVA will host a Facebook Live event with original Phoenix VA whistleblower Brandon Coleman to explore why the Phoenix VA is still failing, over two years after the initial wait list scandals broke there in 2014.

Phoenix, AZ – Today is was revealed there there is no proof to substantiate Department of Veterans Affairs (VA) claims…