CVA to Baldwin: ‘You didn’t show up for us’ 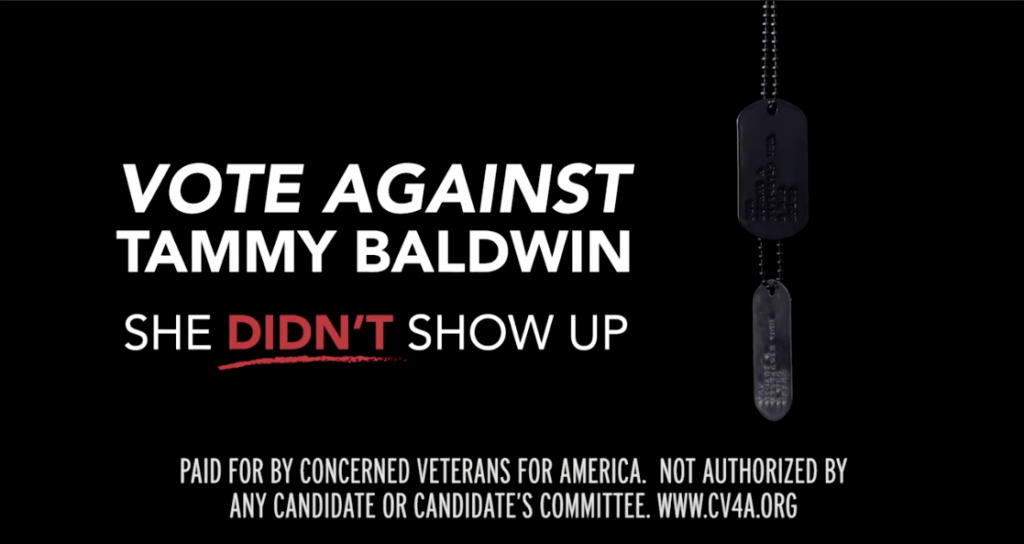 CVA to Baldwin: ‘You didn’t show up for us’

MADISON, Wis.— Concerned Veterans for America-Wisconsin (CVA-WI) on Wednesday launched a new, over $800,000 ad campaign urging Wisconsinites to reject Tammy Baldwin in November. The ad, “Showing Up,” reminds voters Baldwin didn’t show up for veterans, especially when they needed her most. Watch the ad here.

Luis Cardona, AFP-WI Coalitions Director had this to say of the campaign:

“Baldwin’s lack of attendance at critical committee hearings speaks for itself. She doesn’t prioritize us or fight for us in Washington. We need someone who will show up when we need them. Senator Baldwin has not. We need to vote her out.”

“With nearly 400,000 veterans living in Wisconsin, and a VA that has been riddled with scandal, our veterans need a strong voice for them in Congress. Baldwin’s absence and lack of attention at critical moments shows she is not that voice. We need someone who will show up.”

The ad shows Wisconsin veterans asking why Baldwin didn’t show up for important hearings on a committee that could have investigated the Tomah scandal sooner and why she continued to skip hearings after the scandal broke.

The ads will run over the next couple weeks in multiple markets around the state. This is the second ad campaign of the cycle from CVA-WI. The first, a nearly-million-dollar campaign called “Empty Chair” launched last month.

CVA to VA: 'Clock is ticking.'