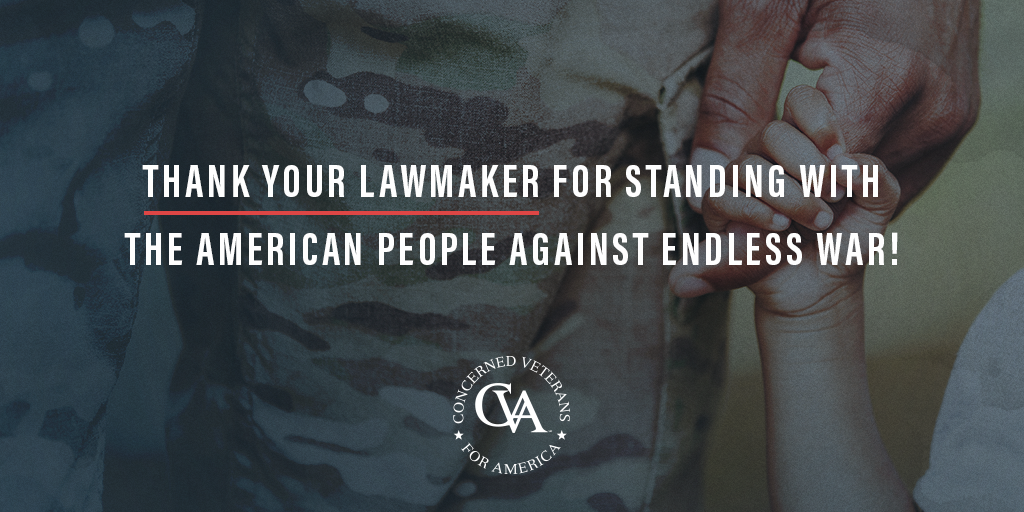 The digital ads commend lawmakers for standing with the American people in favor of a new foreign policy and for their leadership and principled stand on amendments to the 2020 National Defense Authorization Act (NDAA) that would require congressional authorization for any use of offensive military force against Iran. The digital ads will be supplemented by grassroots efforts by CVA’s field staff and activists as well as continued advocacy efforts.

CVA Executive Director, Nate Anderson, had this to say about the effort:

“After almost two decades of fighting, Americans are tired of unending, ill-advised wars. We applaud the principled stances of those members who listened the American people over the din of those in Washington pushing for more war. We want them to know CVA’s grassroots army values their leadership, and that we stand ready and will continue to support those who stand with us to rethink foreign policy and put an end to endless wars.”

The ads will run in the lawmakers’ districts/states and inform constituents that their lawmaker is leading on this issue. Citizens have the opportunity to encourage their lawmaker and ask for their continued commitment in rethinking foreign policy and putting an end to endless wars.

The members selected for this effort—27 Representatives and 4 Senators—were chosen for their willingness to challenge the status quo and work across the aisle to support these bipartisan amendments to advance a better foreign policy for all Americans. The members targeted by the ad campaign are:

The passage of the amendment signaled the continued reassertion of Congress’ role in how the U.S. approaches foreign engagements and is a crucial step in adopting the more restrained approach that so many hope to see. Through this campaign CVA also hopes to highlight the importance of maintaining this progress going forward, as well as public support for a new foreign policy.

Americans are definitely taking note as some in Washington beat the drum for action in Iran, and joint CVA/VoteVets polling shows solid majorities of voters oppose the U.S. conducting an attack on Iran.

Further CVA polling has shown that veterans and military families in particular are largely opposed to more military engagement around the world, and a plurality think the US should be less engaged.

And a recent Pew Research Center survey of veterans gave some insight into sentiments of our entanglements in Afghanistan and Iraq, nearly two decades following our invasion, showing majorities of U.S. military veterans say those wars were not worth fighting. A parallel survey of American adults finds that the public shares those sentiments.

CVA on budget deal: ‘nothing more than kicking the can down the road’