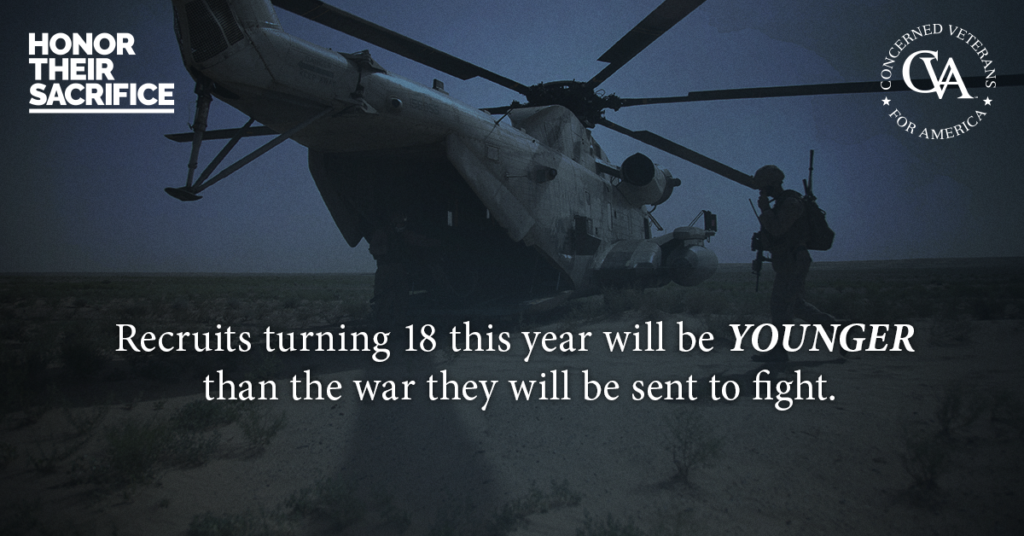 “As of today, American troops have been engaged in Afghanistan for 18 years—America’s longest war ever. This means today’s recruits may be sent to fight in a war that started before they were even born, and many of those currently deployed are likely too young to remember the events of 9/11.

There’s no question we were justified in responding to those attacks, and the men and women who have been sent to Afghanistan have served honorably. But our continued involvement in the region does not serve American interests and only works to destabilize the region further. After nearly two decades of fighting, thousands of lives lost, and trillions of taxpayer dollars spent, it is past time to bring our troops home.”

CVA in September launched its “Honor Their Sacrifice” campaign, a segment of which is devoted to advocating for a full and speedy withdrawal of American troops from Afghanistan.

As part of that campaign, CVA joined with Americans for Prosperity to launch a six-figure television ad campaign dedicated to ending endless wars. The ad ran for two weeks nationally on cable and broadcast outlets and directed viewers to EndEndlessWars.com, where they could sign a petition supporting a full withdrawal of troops from Afghanistan.

The “Honor Their Sacrifice” campaign comes alongside a growing public engagement around ending forever wars, and recent polling showing that the majority of Americans want to leave Afghanistan.

As of September 10, 2019, 2,349 American troops have lost their life fighting in Afghanistan (Operation Enduring Freedom) and more than 20,000 have been wounded in action. Almost one-half (45%) of those killed were 24 years old or younger.

The United states has spent close to $2 trillion on military operations in Afghanistan all considered, with nearly $1 trillion in direct DOD appropriations.

The average life expectancy of an American is 79 years. Eighteen years is roughly a quarter of that (23%).