Denver, CO – As the Senate Judiciary Committee continues hearings on Supreme Court nominee Neil Gorsuch this week, Concerned Veterans for America (CVA) is dropping a second round of direct mail in Colorado, asking citizens to urge Senator Bennet (D-CO) to confirm Judge Neil Gorsuch without delay.  So far, Senator Bennet has failed to publicly express that he will vote in support of Gorsuch, a native of Colorado.

Each piece of mail directs citizens to call a CVA switchboard where they are informed about Neil Gorsuch’s record and then patched through to Senator Bennet’s office. The group will also drop mail in targeted markets throughout Indiana, North Dakota, West Virginia, Missouri, Florida, Maine, and Montana. 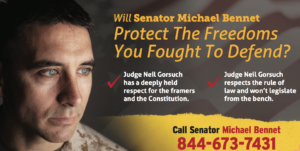 “This week Judge Neil Gorsuch has continued to demonstrate the kind of integrity, independence, and neutrality before the law that he will bring to the Supreme Court bench if he is confirmed. Gorsuch’s dedication to protecting the Constitution has garnered the respect of political leaders on both sides of the aisle and Coloradans of all walks of life who are stepping out every day in his support. Since Gorsuch was announced as our next Supreme Court nominee, CVA has been mobilizing our grassroots army in this fight – and we will continue doing so until the moment that the Senate has confirmed Gorsuch to the bench. We urge Senator Bennet to continue avoiding political theatre this week and to help drive a quick, clean, and thorough hearing process.”

Earlier this week, Senator Bennet appeared before the Senate Judiciary Committee and praised Gorsuch’s record. Bennet said that Gorsuch had a “distinguished record of public service, private practice, and outstanding integrity and intellect,” adding that Gorsuch had won the respect of the Colorado state bar.

CVA is engaged in a unique and unprecedented grassroots effort to help confirm Judge Neil Gorsuch to the Supreme Court bench. The group has made over 80,000 calls to constituents in Colorado asking them to contact Senator Bennet and urge him to confirm Gorsuch without delay. The group has also launched web ads and is promoting a digital tool which allows Colorado constituents to contact their Senators directly via Facebook, Twitter, and email.